The Communist Manifesto in Australia

Journal of the Communist Party of Australia

The Communist Manifesto in Australia

The Communist Manifesto, written by Karl Marx and Frederick Engels for the Communist League, was published in 1848. This year will mark the 150th anniversary of one of the most enduring documents of communism. The Manifesto has its own oral history in Australia.

When Edgar Ross went to Broken Hill to work on the Barrier Daily Truth in 1925, he stayed in a boarding house which had portraits of Marx and Engels on the wall and had, as a fellow boarder, Marxist Paddy Lamb.

Lamb, a miner who had been a member of the first Australian delegation to Moscow in 1921, became Edgar’s tutor in Marxism, and he still remembers how impressed he was with the simplicity of the Manifesto’s language and the clarity of its politics.

Another who was strongly impressed by his first reading of the Manifesto was Irish Canadian Jack Kavanagh who became president of the small Communist Party (1926-29).

Edna Ryan, who managed the Party office in Communist Hall, Sussex Street, could recall that Kavanagh knew the Manifesto by heart; he had learnt it one hard Canadian winter while living in a snowed-in logging camp. Kavanagh began the classes in Marxism which were a feature of the CP in the 1930s and 1940s.

Those classes were important to Della Nicholas — she is Della Elliott now — when she joined the Young Communist League in 1932, when she was 15. She was introduced to the Communist Manifesto by way of those classes and to a new way of looking at the world — “the history of all hitherto existing society is the history of class struggles”. Della’s father, mother and sister were all to become Party members.

Sometimes the familiar language of the Manifesto gave people confidence.

When Phyllis Johnson was organising street meetings in East Sydney during the Depression, she asked George Gowland to speak, but he demurred, thought he lacked the necessary ability. However, he was persuaded to act as chairman. He opened the meting with his own paraphrase of the Communist Manifesto’s opening sentence — “A spectre is haunting Australia,” he said, “the spectre of communism”. Then he introduced Phyllis. George Gowland was later a member of the Party’s State Committee.

During the Party’s illegal period (1941-1943), a leaflet boldly titled the Communist Manifesto used the power of that title to draw attention to the real matter of the leaflet: the Party’s tough and long-standing struggle against fascism.

The first centenary of the Communist Manifesto occurred in 1948 and it was marked in various ways in Australia. Several Sydney branches commemorated the event with cottage lectures, and one with a musicale; the Communist Review carried an article by Vin Bourke on the origins and history of the Marxist revolutionary movement.

In Melbourne a group of communists put on a locally written show in a “living newspaper” format in which sentences from the Manifesto, spoken by various actors, punctuated the action. Mona Brand, who was present, used the same format for her acclaimed On Stage Vietnam at the New Theatre some years later.

Edgar Ross shall have the last say on the power of the word — or rather, belief in the power of the word. Paddy Lamb, referred to previously, was an old friend of Edgar’s father, Bob Ross, a highly respected Victorian socialist, but one who had resisted all Lamb’s attempts to convert him to Marxism. Paddy could not understand such stubbornness, especially since “he has read the Communist Manifesto a dozen times”!

And we still read the Communist Manifesto.

A SECRET review of the NBN prepared for the Gillard government almost three years ago estimated it would leave taxpayers up to $31 billion worse off and warned of major risks in the plan, many of which were later realised. The Weekend Australian has learned that the review by investment bank Lazard found the project would confront construction problems leading to cost increases for the building phase.

Federal politicians taking RAAF-operated VIP flights are costing taxpayers $50,000 for every hour spent in the air.

Documents obtained by Fairfax Media call into question the Abbott government’s insistence that using luxury air force jets to shuttle ministers and MPs to Canberra from as far away as Perth is often cheaper than individual commercial fares.

The Leader of the House, Christopher Pyne, on Tuesday defended the use of a Defence-leased Boeing 737 to fly three government ministers and six other MPs – including Don Randall, one of the Liberals at the centre of the expenses scandal – from Perth to Canberra for the opening of Parliament this week.

”It’s probably cheaper than bringing them all individually on Qantas or Virgin,” Mr Pyne said.

But a breakdown of the true cost of VIP flights, obtained under freedom of information, suggests that is not the case.

According to the figures – which include the cost of leasing aircraft, maintenance and airport fees – a single four-hour flight from Perth to Canberra costs the public just over $200,000.

The businessman’s company also donated $67,637 to the Liberal and National Parties from 2008 to 2011 as it sought to resolve a contract dispute with Sydney Water despite Treasury advice saying it had “net assets worth $36”.
ICAC, which will begin hearings into Australian Water Holdings on Monday, announced it would broaden its inquiries to look at Mr Di Girolamo’s salary and that of other AWH executives.
Mr Di Girolamo was eventually forced out of the company in April 2013 with “a token payment” after he had the firm take a $5 million loan from four business people and was unable to pay it back, The Daily Telegraph can reveal.
The UNs version of where Australia sits in respect of Agenda 21.:

And the bond university course links are worth a look so see just how widely entrenched this stuff is:

The big problem we have is that the very understanding of what sustainable development is seems to vary widely, if you look at the bond university initial link 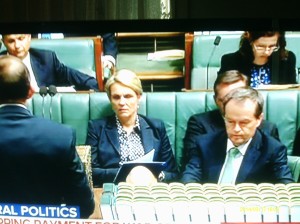 3 Responses to The Communist Manifesto in Australia